Book Review: A Battle Hymn of the Tiger Mother by Amy Chua

Have you ever heard of this book? I never have and then this came up as a book choice in my book club.  I will preface that my book club is made up of suburban moms in their late 20's to early 40's.  So my initial thought I'm not going to lie was that this was going to be a lame-ass book about raising your kids. Now I'm a mom and I can appreciate self help books but not for a book club , I was a little upset but then I sat down to read it and I was surprisingly intrigued. 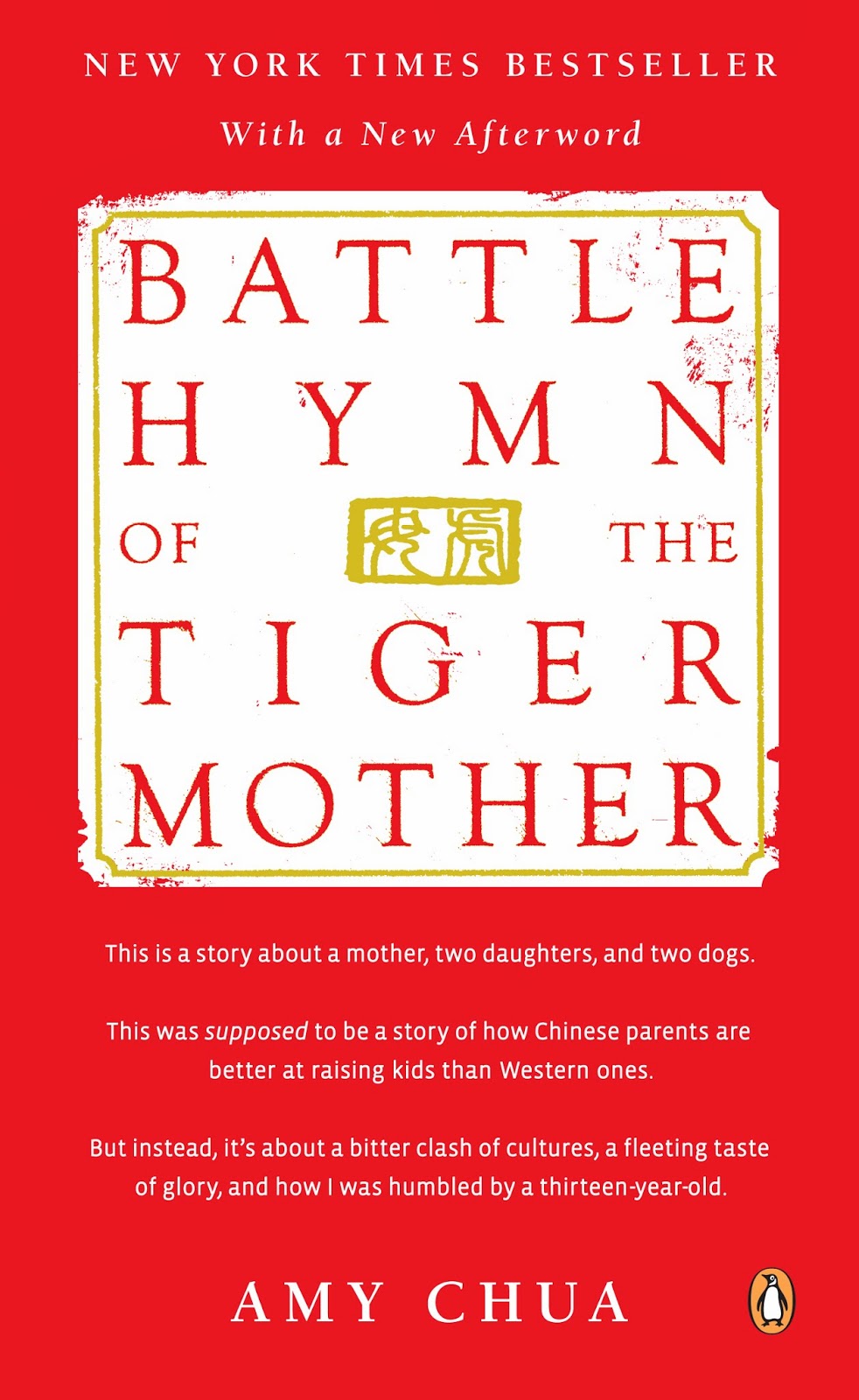 I will start with what I found positive in the book and what I could relate with. My parents are immigrants from Poland, so I felt that in some situations of this book I could relate. I tell you that my parents are immigrants because I think that this population of people came to the United States and things were not easy for them. The had to work really really hard just to make it and wanted to give their children (my generation) the best life they could give them.  So I felt that Amy touched on this alot in her book. She struggles with raising your children the 'Chinese' way or the 'Western' way. She critiques the Western way of raising children is very lax and without forcing children to do anything and this is why we have unmotivated kids.
With an immigrants kind of mindset things are not always sugar coated for kids and kids need to work really hard to get some praise if any. At first it seems very harsh that Amy forces her children to practice hours and hours of piano and violin to be the best and she actually doesn't say great job she critiques them. I thought wow what a jerk I would be standing up and clapping if my daughter did that. But then I thought back to how my parents were. Really they weren't all that different. My mom never not once had a clue if I had homework that needed to be completed or if there was a project due at school it was just expected. If I brought home anything less then an A well then I was an embarrassment. I guess that was the driving force, I didn't want my parents to be embarrassed so I strived to do well. At one point in the story she buys a dog and tries to make it the best dog and tries to train it but quickly realizes that this is not something that can be done. She and her husband are very well educated individuals with several degrees and teach at an Ivy  League school. The vacations that they take are not your typical Disney Land or Wally World type trips. Instead they travel to foreign countries in Europe and still then the children are forced to practice violin and piano for hours. I thought this was insane! No vacation what so ever! I kept putting myself in her kids positions and I think I would have rebelled with piercings and tattoos and would have run away from home.

Towards the end of the book she begins to wrap things up and states that her daughters were grateful for this kind of upbringing. Very strict, very structured childhood. I think they didn't know any different. I always have felt your a kid once in your life and it never comes back so why not enjoy it! I don't think kids should run a muck but I think being creative and playing is the most valuable thing in the world. You have your entire adult life to work at things why not enjoy being a kid!

The biggest negative I could find about this book is that it felt very repetitive. She kept jamming piano and violin down her kids throats! She was repetitive with her reasoning like she was justifying  for herself what she was doing.   She mentions her husband a few times but I can't believe that he had allowed a lot of this to happen. There are some moments in the book that I thought what that's really intense!

Overall I say read it if this sparked your interest but if you never pick this up you didn't miss out on anything!!
Posted by MissVickyBee at 3:19 PM