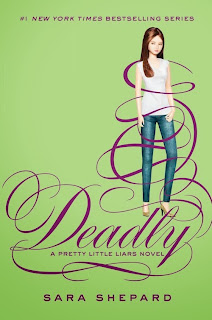 I am going to start by saying that I love the books and I love the show. The show is currently on a winter break and is coming back January 7, 2014. I can't wait!! So, to get my Pretty Little Liar's fix I had to read this book!  The book overall sheds a lot of light on things that happened in the past. We open the book with Allie so we get a little more insight about her. We find out some secrets about the mysterious guys (Phineas, the guy who helps Emily when she is pregnant)  in all of the girls lives. It's a pretty great reveal and I don't want to give that away with out you reading it for yourself. I did have some moments where I was like ' I can't believe I didn't see that'. It's honestly what keeps me going with this series.  She is a little wild and pulling for things where I think 'oh that's just ridiculous'  For example I think it was in two books back where Aria sees Noel Kahn's dad and he dresses up like a woman and you think it's this huge reveal but really the mom knows about it!! Ridiculous!! So anyway Aria has issues with Noel in this book because he lied to her and he was with Allie and you find out that they were closer then we thought so Aria is not speaking to him.  Hannah is dealing with the death of Graham and all the weird stuff that went down in the burn clinic. A manages to really screw up their lives and the girls think that they might end up in a prison in Jamaica for Tabitha's death.  There is a lot of energy that you feel very on edge like maybe they are going to end up there. Iris has gone missing and this isn't as big of a deal as I think it should have been. Come on a crazy person has escaped and no one really thinks anything of it!! A is really really hard on them in this book and really wrecks their lives.  So if you like to read about the girls squirming, then this book if something you will enjoy a lot!! We like Melissa in this book, she seems to be helpful along with Wilden. So lots and lots of topics are touched!!

If you are not familiar with the series but you watch the show, don't be discouraged that you can't read the books. The books are nothing like the show. The show has a different story line. The characters are the same personality wise but physically different. An example is Spencer is a brunette in the show and a blonde in the books. Also Emily has a sister in the books and I don't think I have seen a sister in the show.  If your interested in reading the books because you are a fan of the show definitely do so because the show will not ruin anything for you.

I have heard that Sara Shepherd has a contract to go up to book 16, so we know we still won't know who A is until then.  One thing I will say is that there are some major things revealed in this book but sorry we still don't know who A is. We assume it is Allie and pretty much know it's her but how does she do it? I think thats what we all are really waiting for. Is it a team who is in on it and how is it that she is always there without anyone seeing her. I'm hoping everything will be revealed because it's driving me crazy.

I overall was satisfied with the read but I am hoping that the next two books will tie everything together. I think we are all waiting for the answers and need them sooner rather than later. I wouldn't be surprised if she wrote another book this year but who knows!

Happy reading and please let me know what you thought of this book!!
Posted by MissVickyBee at 9:21 PM