I'm a huge Pretty Little Liars Fan. I have read all of the books and I have watched all the shows. I think that the books are amazing but I love the show just as much!! 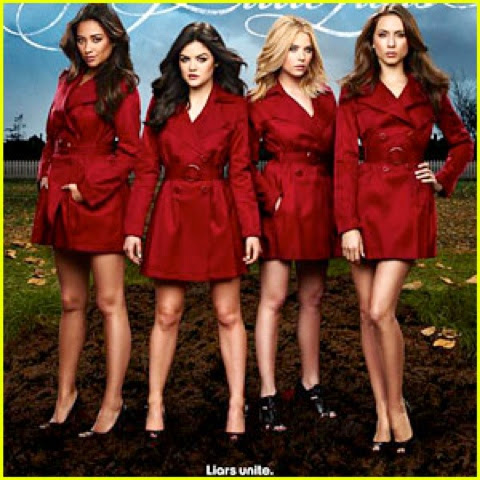 So with that said I wanted to recap what happened and what my theories are. At first when I began watching the show it was difficult for me to seperate the characters and what was happening but as the show went on it went in a COMPLETELY different direction from the books so it became easier, I do think that ABC family will somehow want to incorporate some big things from the book and that is where I kind of will be drawing my theories.
It's been very exciting in Rosewood lately.  We get to finally see Allie. She has been this great mystery and we finally get to see her. She helps fill in the gaps of things that happened. We learn that her and Ezra had a little thing. I was still a little suspicious of him that he had ill intentions for Allie and was using Aria.
Aria is just so hurt by Ezra. It doesn't seem that she will forgive him for anything. I was thinking that they would not get back together.
We get to see how Mona has played a role in this. She was the one who picked Allie up and gave her a disguise and was supposedly being a good friend. Then there was a super creepy shot of her playing with the doll!!
The super exciting scene with the girls in the coffee shop and someone shoots at them and chases them to the roof top is probably the most exciting episode I have ever seen. The fact that A jumped from one building to the next makes it difficult to figure out who A is. Ezra is shot and he says he knows who A is.
And they leave us hanging until June!
What have I concluded??!? I think that Allie's twin will come into the picture. In the books Allie has a twin named Courtney and she has a huge role. I think this may have been the person who hit Allie with the rock and Mrs Dilaurentis was trying to hide it so that she can protect her daughter. That is the only reason that I could think that a mother would bury her daughter, to protect another child.  Melissa whispers something into her dads ear and there must be something that one of the girls did because Mrs. Dilaurentis warns that you should never cross a Hastings. The fact that Ezra got shot I think that he will survive but won't remember a thing!
I'm really at a loss for who A is. I think it's a male based on how athletic he was but what's your guess?? Do you have any thoughts on it??
Posted by MissVickyBee at 8:13 PM